Dwayne Johnson lays down the Lore 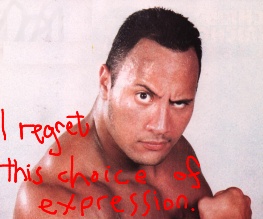 Tooth fairy, Twitter guru and general one-man army Dwayne ‘The Rock’ Johnson has signed up to a film that basically sounds like a cross between Men in Black and Hellboy. And that suits us down to the bloody (which it certainly will be after he’s got his ass-kickin’ boots dirty) ground.

In The Lore, Dwayne will play a human (should be easy enough) who discovers that mythical monsters are alive and well and on a constant quest to rip great big bleeding holes in humanity. He’s co-opted into a secret society of monster-hunters called The Shepherds, whose mission is to man the borders between Humanity and Mythology. Man them, we imagine, with extreme prejudice.

Could this be the least imaginative idea ever? We genuinely don’t care, because Dwayne Johnson is an absolute badman and everything he touches turns to bicep. Production is set to begin this summer, with Priest screenwriter Cory Goodman currently working on a script. Hey, Cory? If you don’t write in a scene where Dwayne punches out a Minotaur with one right hook, we’re not interested.

Previous: 10 reasons you should bother with the Harry Potter Studio Tour
Next: American Reunion