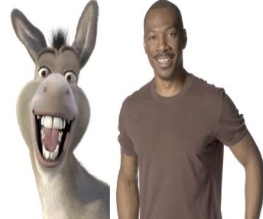 We know what you’re trying to do here. We’re aware that international ratings for the Academy Awards have plummeted in the last couple of years, and with 2011’s down 10% from 2010’s, you must be getting a bit desperate. Your attempts to reach out to the younger, hipper generations of film-goers have, let’s face it, failed. You’ve done the oddly topical older gentlemen (Alec Baldwin and Steve Martin) you’ve done the precocious upstarts (James Franco and Anne Hathaway) and you’ve even done the inexplicable out of leftfield choice with Hugh Jackman. But Eddie Murphy? Does that really make sense?

When we heard that Eddie Murphy was the frontrunning choice for the Academy Awards, we were initially a little excited. And then we remembered: Hang on, this isn’t 1988. It’s 2011. While Murphy was once a comedic giant and one of the most magnetic personalities in entertainment, these days he’s little more than a children’s entertainer. His last actual good movie was Mulan, for God’s sake.

Academy, if you really want to go down the edgy comedian route, we suggest someone you know, relevant. What about Donald Glover? Even Russell Brand would make more sense. Come on, Academy. We know you can do better than this.