Elysium trailer is here and it’s…meh 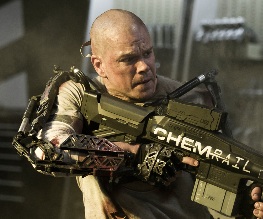 We finally have the first trailer for Elysium, the sci-fi movie directed by Neill Blomkamp and starring Matt Damon, and it looks to us like a pretty tame trailer for what we hope will be a brilliant film. It’s not that there’s nothing to get you excited. There’s spaceships, massive guns, explosions, a sword-wielding Sharlto Copley, beautiful futuristic landscapes and even a girl in a tiny red bikini. Overall though, this could be a trailer for any action movie going. The dialogue featured is sparse, but typical shoot ’em up movie fodder: “We’re going to break into the most heavily guarded place in the universe?” Damon says at one point; a line which could easily be from the dreadful Lockout or Universal Soldier. We’ve got to admit, the words “They’re gonna hunt you to the edge of the earth for this” did give us a chill. Check out the trailer below:

Set in 2154, the very wealthy live in a man-made space station called Elysium where everything is perfect. Meanwhile, the poor people are left back on a desolate Earth where poverty is rife. Damon plays Max, an ordinary bloke who finds himself on a dangerous mission to Elysium in order to save his life and unite the two classes of people. Jodie Foster also stars as Secretary Delacourt, a hard-line leader who will stop at nothing from keeping the residents of Earth out of Elysium.

The film does look promising – there’s no 3D gimmick for a start and parts of the trailer were visually stunning. However it’s a little hard to buy into Damon as “just a regular guy”. He’s Matt Damon for crying out loud. We’re very much looking forward to this one, though.