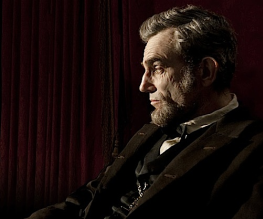 The new trailer for Lincoln has been released and, rather predictably it looks pretty good. Starring Daniel Day Lewis, Sally Field, Tommy Lee Jones and Joseph Gordon-Levitt ( yes we know, he’s in everything these days) there was never really much chance of it not looking good was there? It’s very much what we were expecting; lots of plaintive piano pieces accompanying scenes of Daniel Day Lewis looking pensive, epic battle scenes, men with long beards shouting at each other in court rooms etc.

The film appears to be focusing mainly on Lincoln’s fight to abolish slavery rather than providing an exhaustive account of his life as whole, which is a wise choice. Often, these kinds of historical biopics make the mistake of biting off more than they can chew, and the Lincoln trailer looks like it might avoid this pitfall. Daniel Day Lewis looks scarily authentic as Abraham Lincoln and we have a sneaky suspicion he could be in for another Oscar nomination with this one. It is directed by Steven Spielberg though, and our only worry is that he might let his tendency to eke every last bit of sentiment out of a film as he possibly can might get distracting.

What did you think of the trailer?

Previous: Savages
Next: Tom Hanks and Michel Hazanavicius to team up for Nazi drama