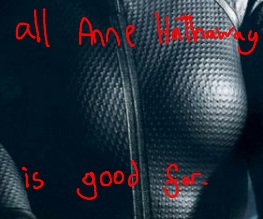 Fewer than two months of useless Bat-free days lie between us and the release of The Dark Knight Rises, and the mindless bastards good people at Warner Bros have obviously realised that if we have to go another ten minutes without seeing more overproduced photos of the characters we’re already sick to death of then we’ll probably burst.

Anyway, there are some new posters and this is us being enthusiastic about them. What the fuck do you want from us? The Daily Mail called Catwoman a “saucy thief” and refers to her “sexy but functional costume” and “militaristic motorbike”. IT’S THE FUCKING BATPOD WHAT THE FUCK ARE YOU FUCKING TALKING ABOUT YOU FASCISTS.

The Mail goes on to observe that “Rain is… a theme in three of the images, with both Batman and his arch-enemy Bane photographed standing in a downpour. And while some will think it merely means the superhero forgot to put his Bat-brolly in his utility belt, film aficionados will realise it usually is a symbol for serious loss or death.” Profound. We might just quit and leave the film writing to the borderline Nazis with a passion for sexualising underage girls, they have it pretty much sewn up.

Hurrah for the Blackshirts! And for Bane! And Satan!