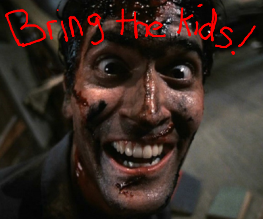 Evil Dead, despite having a red band teaser trailer that created a continent-sized level of queasiness, is aiming for an R rating, so sayeth the Almighty Bruce Campbell. The original Evil Dead received an NC-17 rating, so the remake is actually attempting to be less disgusting, which is remarkable considering the gore in the trailer alone. Could this be a sign of our degenerating values as a society?

An R rating would allow small people of ages 17-and-under to get into the Evil Dead remake as long as they were accompanied by an adult. The alternative to Evil Dead getting an R rating would be it receiving an NC-17 rating: no minors allowed. Quite frankly the distinction seems like splitting hairs when it comes to Evil Dead. No matter what rating the film gets, it’s still going to have self-mutilation and tree rape.

Honestly, is anyone going to take their kids to this?

“We have to try and get it to R. Wish us luck. We haven’t gone through the ratings nightmare yet, that’s coming. We have a screening coming up for the MPAA, I can hear them laughing already. ‘You want an R rating?’ I can hear their evil cackle from here. We’re gonna see, but we’re gonna give them the toughest version that we can give them. That’s what you want from a horror movie, man. Especially one called Evil Dead.”

Still, Jaws got a PG rating, so we suppose anything is possible.

The Evil Dead remake: can be it as good/horrific as the original? Are the soothing words of Bruce Campbell enough?

Previous: Transformers 4 will be set four years after Dark of the Moon
Next: Oz: The Great and Powerful gets flying monkeys