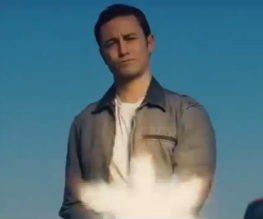 Could this be the film that saves Bruce Willis from another annus horribilis? We’ve been pretty psyched about Looper for a few months now, but it’s worth bearing in mind that we were excited about In Time too and that was a fucking disaster. If only there was a way for Best For Film’s staff to travel back in time from thirty years in the future to the present day and tell us if it’s any good…

…and then we could shoot them. Check out the new trailer:

1) We’re very, very interested in the Rainmaker, a future despot who has turned Bruce Willis’ world into hell on earth and personally wrecked his life. Is JGL going to see sense and help his future self track down this embryonic tyrant? Of course he is.
2) “Every second that passes is bad” is the worst line in any film ever. Tut, Jeff Daniels.
3) WHY THE FUCK IS EVERYONE TELEKINETIC? Seriously, this is the first we’ve heard of the cast of Looper collectively doing a Jean Grey – one second there’s a cheeky little ‘Are you TK?’ billboard, and then before you can say ‘it’s actually called psychokinesis’ Bruce is making all the bits of grass float and some other chap is fully rocking a room of flying chairs. This is mad.

Are you still excited about Looper? Let us know below! By yesterday.