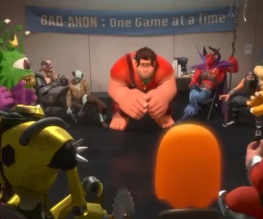 Has Disney finally made a Pixar-quality film on its own? It’s possible. Three long months after the first teaser trailer for Wreck-It Ralph hit the web, we’ve finally got a proper look at the film which promises to do for animation what Scott Pilgrim vs. the World did for kooky indie cinema; 1) fill it with references to 90s video games, and 2) make it AWESOME.

Check out the new trailer below:

Oh god, we wish Tash was here – she’d probably recognise all sorts of esoteric characters that mean nothing to anyone who didn’t fritter their teens away playing Street Fighter 2 until the buttons wore out. Suffice to say that it’s visually stunning, tying together modern and retro games with aplomb, and that we actually laughed. Like, six times. At a Disney trailer! What a time to be alive this is; and Jane Lynch is going to be easily brilliant enough to cancel out Sarah Silverman.

What do you think of the new Wreck-It Ralph trailer? Let us know below!

Previous: That’s My Boy
Next: Pacific Rim to be converted to 3D – against director’s wishes