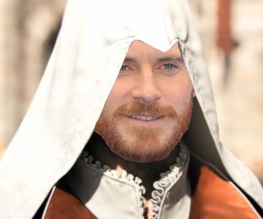 Let gamers rejoice! After years of dismal game-to-film adaptations (Tomb Raider, Silent Hill, Hitman…), the critically acclaimed Assassin’s Creed series is abseiling deftly into cinemas to stab Lara Croft and Agent 47 with his swanky hidden blades. And the star billing for this festival of nifty knifework has gone to none other than Shame star Michael Fassbender!

The German-Irish actor will be playing Desmond Miles, a modern everyman who discovers that he’s descended from a line of secretive assassins. He’s abducted by Abstergo, a mysterious biotech company which sequences his genome and uses it to make him relive the memories of his ancestors Altaïr Ibn-La’Ahad, a Syrian Assassin, and subsequently his Italian descendent Ezio Auditore da Firenze.

There have been four AC games to date, but the legend continues; Assassin’s Creed III, which is currently building towards an October release, will see Desmond (now being sent back in time by some rebel scientists who rescued him from Abstergo, natch) inhabit the memories of Connor Kenway, an English/Mohawk Assassin operating in America during the Revolution. We presume that Fassbender will be taking on no more than one of Desmond’s illustrious ancestors – why spoil the inevitable sequel?

Despite our better judgement, we’re a little bit excited about this. Wouldn’t you like to hear Fassbender delivering Ezio’s whispered ‘Recquiescat in pace’?

Would you watch an Assassin’s Creed film? Let us know below!