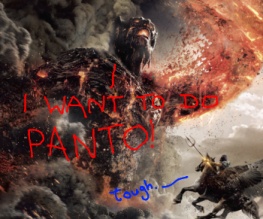 Apparently Wrath of the Titans is going to happen to cinemas next month whether we like it or not, so you might as well look at these new posters in advance – at least that way you won’t be shocked into laughter or vomiting when you see a giant cardboard Sam Worthington standing in the foyer of your local gigaplex pretending that a) he knows how to use something as complicated as a sword and b) he can act at all. Whatever. The new posters show Sam looking angry, Kronos looking really angry and various monsters also looking angry (because they’re ugly monsters), as well as some humans looking moody/angry depending on the light.

Just click on them, look at the big versions and then hurry off to kill yourself:

In what horrible, twisted world is it necessary to write ‘FEEL THE WRATH’ on five different posters that you’re releasing at the SAME FUCKING TIME, Warner Bros? Give us strength.

Do you want to see Wrath of the Titans? In that case you’re banned from this site. Piss off to Empire or somewhere, God knows they’re not choosy.