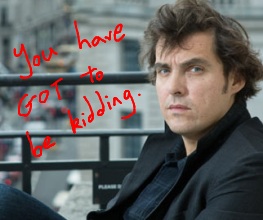 Last week rumour abounded that Joe “Just All” Wright was in line to direct the adaptation of Fifty Shades of Grey, which is odd for a few reasons. Firstly, surely nobody cares about Fifty Shades of Grey anymore? I mean, I haven’t seen anyone reading it on the tube in ages, and there aren’t any posters up either, meaning that Fifty Shades is the literary equivalent of a bad one-night-stand – people got in, fudded themselves royal, and got out.

Another oddity in this story is that Joe “Just All” Wright makes films that are…well, just alright, hence my hilarious pun. Atonement was dead good, but Pride & Prejudice, The Soloist, Hanna… all visually interesting whilst remaining rather thin in terms of y’know, plot, story, all that boring filmy stuff that makes James Cameron break out in hives.

But in any case, Wright seemed nailed on to helm the S&M charged cock-fest, until reports emerged today that it “didn’t fit with his schedule.” In related news, a van of barge poles was seen being delivered to Joe Wright’s house.

In any case the film still looks set to arrive in theatres next summer, even though by then literally nobody will remember what all the fuss was about in the first place, and besides isn’t Nymphomaniac coming out next year too? That has actual sex in it, which as we all know is uncouth and disgusting and oh my God is that Shia LaBeouf on crack put your knob away Shia we haven’t started rolling yet.

Angelina Jolie is the only other name of note to have been linked with Fifty Shades. She’s got bigger fish to fry right now, mind.

Who do you want to see direct Fifty Shades? Absolutely nobody? Seems fair.

Previous: Jennifer Garner and Michael Caine to Imagine
Next: Medieval Times to get its own movie?!?!?!