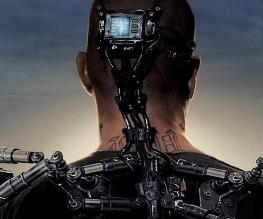 The first poster for Elysium has landed, and Matt Damon‘s on it looking like the product of a human mating with a Dell. We don’t mean that harshly, the mechanics fastened to the back of Damon’s head are both seriously cool and a bit chilling. Damon also has a shaved head, tattoos and arm bandages in order to make sure we know that his character is a bit of a hard nut who can handle himself in a fight. What’s also pretty nifty about this poster is the fact it isn’t in your face. We’re not given a full frontal shot of the hero – as would be the case in, say, a Tom Cruise movie; which leaves plenty of room for imagination and makes you want to see the film to find out more. Nicely done, Team Elysium. Gaze upon Matt’s splendid back in the clickable poster below. 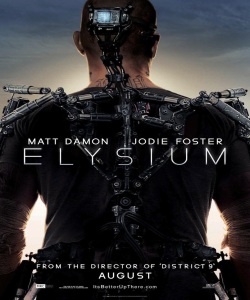 Elysium is firmly rooted in the sci-fi genre, set in the year 2154 in a world which is divided into two classes: the filthy rich and the very poor. Damon plays working class hero Max, who is sent on a dangerous mission to Elysium where all of the wealthy folks reside. If he is successful, not only will the two classes of the world be united, but his life will be saved. Jodie Foster stars as the villain of the piece, Secretary Rhodes, who does everything in her power to stop the little poor people emigrating to Elysium. Neill Blomkamp is on directing duties, while Sharlto Copley, Alice Braga and Diego Luna co-star. Elysium rolls out in cinemas from August 9.

Previous: Star Trek Into Darkness gets some hi-res stills!
Next: Man of Steel’s new tv spot