First full trailer for Rise of the Planet of the Apes 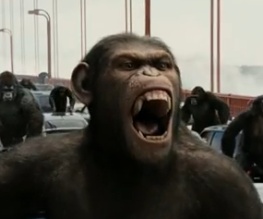 Ever since the teaser trailer hit a couple of months ago, we’ve been searching our co-workers’ arses for tasty fleas with excitement at the prospect of a full-length trailer for forthcoming simian reboot Rise of the Planet of the Apes, and our patience has finally been rewarded. Ever wondered what would happen if James Franco sent the world to hell in a handcart by adopting a mutant Gollum monkey?
You’re in for a hell of a treat:

Lol, WUT? We haven’t quite got the chemically-boosted cognition necessary to properly catalogue everything that was mental about the last two minutes, so we’ll just pick up on a few obvious points:

– Do not, DO NOT call a new and untested medicine ‘The Cure’. You’re asking for trouble.
– If you don’t want your mutant Gollum monkey to end up with a superiority complex, for fuck’s sake resist giving him luxurious jumpers and touchscreens. He would have been happy in his attic with his green crayon.
– If you know your mutant Gollum monkey has potentially uncharted mental capacity, don’t put him in a cage surrounded by his less fortunate brethren and enough useful sticks to break himself out. Also, lock your fridge.
– Don’t put Malfoy on ‘make sure no chimps run along that roof’ duty. He WILL look the wrong way.
– D’you know what? Shoot them. Definitely shoot all of them before they start throwing axes at cop cars and ripping horses’ faces off. What’s wrong with you, James Franco? It’s not like anyone gave a toss about offing Kong, and he was much cooler than this uppity little git.

Rise of the Planet of the Apes begins its assault on an unsuspecting world on August 12th.

Previous: Mammuth
Next: Is X-Men: First Class getting a sequel?