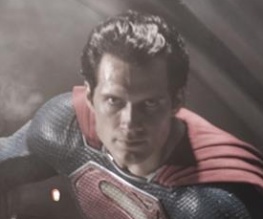 Just days after the major cast for Zack Snyder’s Superman reboot Man of Steel was rounded out with the announcement that Larry Fishburne would be stomping all over the Daily Planet’s offices as Perry White, Warner Bros have finally thrown us a bona fide fanboy bone (none of that, you). Yes, the first image of Henry Cavill as Wonderboy himself has arrived! We hate to gush, but this really is a spectacular still. Gone is Brandon Routh’s plasticky Ken face and Day-Glo Spandex – Cavill’s suit looks like it’d actually be good for more than attracting attention in a gay bar, with a stippled effect reminiscent of Andrew Garfield’s Spidey costume and some rather natty cape pleats thrown in. Cavill also has less painfully effete hair than any Superman we can recall (finally, no more kiss-curl!).

Taking a moment to drag our eyes away from the Man of Steel’s well-turned calves, his tensed pose and distinctly alien surroundings -or could that be a Metropolis bank vault? – suggest a fairly substantial showdown with General Zod (Michael Shannon), although in fairness that was always going to happen. All in all a pretty decent photo, wouldn’t you say?

Well, would you? Let us know below!

Previous: The Auteur Is Dead, Long Live The…
Next: 3D Sex And Zen: Extreme Ecstasy