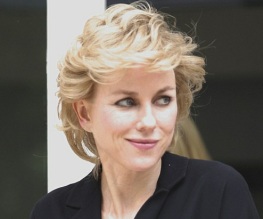 When we heard that Naomi Watts had signed up to play Princess Diana in Caught in Flight, we were rather snide about it (mostly because she isn’t original star Jessica Chastain, but quite a bit because she’s the most boring woman in the world). Now we’ve seen the first papped image from the set, we are at least willing to concede that Watts will look quite authentic while she butchers yet another role.

Click to enlarge, unless the nostalgia gets too much for you. A ROSE, YOU NEVER USED YOUR THORNS: She certainly looks like Princess Diana would have looked if she’d a) looked like Naomi Watts b) spent her time smirking at something off-camera rather than having affairs and cuddling orphans c) not been assassinated by Prince Philip’s trained murderers, so those are three points in Caught in Flight‘s favour. Still, her costar Naveen Andrews looks substantially less like Diana’s lover Hasnat Khan than my uncle Richard does – so perhaps we won’t even notice Naomi. Oh wait, of course we will… she’ll be the one chewing the scenery.