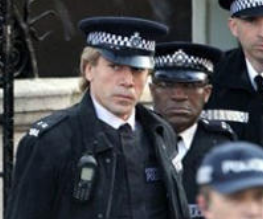 After gracing us with a startlingly boring first image, it looks like team Skyfall aren’t afraid to let loose pigeons among the pigeons. There are more photos, and they’re quite dull, is what we’re trying to say. Still, Javier Bardem has blonde hair! YEAH!

We know that Bardem is playing the antagonist in the twenty third Bond outing, and that all our favourite MI6 bad-asses are back (and by that we mean that Judi is clinging on by the skin of her exquisite teeth, and that we’re still not totally sure what to think about the Ben Whishaw news). But what of this villain? What is his name? What is his quest? What is his favourite colour? It’s still all to play for, though these two new pictures do at least give us a smidgen of a clue… PC Javier, is it? Or is there some undercover maiming going on? There’s only one man who can figure it out, and he’s got an upsettingly dusty suit:

You can say what you like about Tomorrow Never Dies, but Pierce never would have put up with being this unkempt.

Previous: Booked Out
Next: The Raven