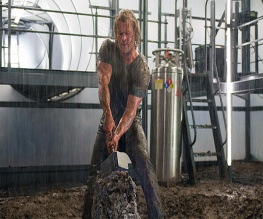 By Odin’s beard the official Thor trailer has finally arrived! Director Kenneth Branagh’s comic book adaptation details the story of epic title character Thor (Star Trek’s Chris Hemsworth) and his banishment from the heavenly realm Asgard by his father Odin (Anthony Hopkins). Finding himself on Earth after his fall from grace, and meeting sexy scientist Jane Foster (Natalie Portman), Thor must battle his way back to redemption, with opposition from evil trickster brother Loki (Tom Hiddleston), using his considerable fighting prowess and the almighty hammer “Mjöllnir”.

Wow! That trailer is actually a little too epic in some ways. Did you see him smash that statue guy in the head with his hammer and then all cool-like, probably thinking “I’m badass yeah“, call it back to him? Rounding off the fantastic cast is Kat Dennings (Nick and Norah’s Infinite Playlist), Stellan Skarsgård (Pirates of the Caribbean: At World’s End) and Ray Stevenson (Punisher: War Zone). Thor is set to hit cinema screens 29 April 2011 so be ready for it!

Previous: Eminem to star in boxing movie Southpaw
Next: The 10 worst British accents in cinema history