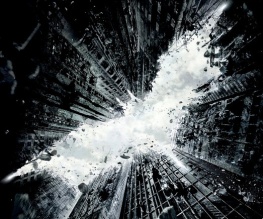 With rumours claiming the first teaser trailer for The Dark Knight Rises will premiere at screenings of Harry Potter and the Deathly Hallows: Part 2 this weekend, Christopher Nolan has once again unclenched his tightly puckered publicity arse just enough to let slip another droplet of warm, greasy and pungent Batman excrement excitement – the first poster for the hotly anticipated threequel. Here y’are: …it’s alright, isn’t it? Alright, but not enormously stunning or memorable and certainly very derivative of this poster for Batman Begins: Oh okay, maybe it’s a deliberate reference. But seriously, Chris, when are you going to stop making chiaroscuro posters of slightly stylised buildings decaying? To be honest, we’re just confused and hurt that you’ve suddenly withdrawn our regular fix of ‘shadowy figure in foreground’. How are we supposed to understand that your films are all about one man standing in the path of a whirlwind of mad dark shit if you don’t SAY IT WITH POSTERS?

We’ve actually pointed this out before, but he’s clearly not listening. Look at these – three from The Dark Knight, one from Inception, one more from Batman Begins and a cheeky bit of The Prestige (that was after he understood the importance of shadowy figures but before he clocked on to shadowy skyscrapers):