First poster for The Dinosaur Project 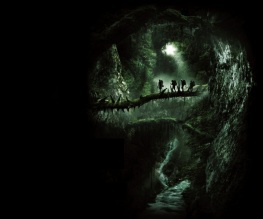 Dinosaurs? But they’re extinct, right? WRONG! They’re alive and well and crashing about the Congo and, come August 10th, they’ll also be crashing onto our screens in The Dinosaur Project. The folks behind this dino-romp have released the poster today and it’s just lovely. Yeah, whatever, you’re thinking, just a picture of a T-Rex. Oh NO. Click below to see the full poster. Pretty good eh? In the spirit of The Blair Witch Project, we’re supposed to believe that this film uses actual footage filmed by the British Cryptozoological Society in the Congo in 2011. The team that set out last year in search of Mokele Mbembe, Africa’s Loch Ness Monster, remains missing and The Dinosaur Project is designed to help raise awareness of their situation.

The marketing team are taking the whole thing very seriously; the British Cryptozoological Society has a real website and producer Nick Hill issued a statement yesterday saying “It has been incredible to have the original source material to work with, and we have great respect and admiration for the work of the Cryptozoological Society and are keen to support them in their search.

“The movie raises important questions about species which conventional science tells us have long since become extinct, and we hope it will help raise awareness of the search to locate the missing persons and the BCZS’s ongoing work in the Congo.”

So far, so ‘believable’. Except a quick look to the trailer will tell you everything you need to know. That and the fact that everyone in the recovered footage has an IMDB page. And it’s a film about dinosaurs. Whatever. Its more fun to get on board, so we at Best For Film, wish the Cryptozoological Society all the best and pray the original expedition team are found safe and well.