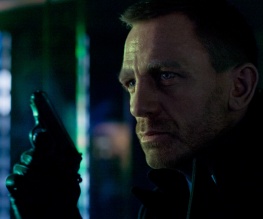 It’s only two hundred and sixty-seven and a half days (ish) until the release of Skyfall, the 23rd Bond film! Pity nobody cares any more, isn’t it? In a completely ill-advised attempt to get people excited about Daniel Craig’s third adventure as the trigger-happy misogynist, producers Eon Productions have released this crappy image of Bond spying so hard he doesn’t even have time to shave.

Give us strength (and click the image to enlarge). What does this image tell us? That Bond is somewhere in South-East Asia (apparently it’s Shanghai), that he still can’t handle a big boy gun and that he’s unbearably scruffy for someone who’s technically representing Britain abroad. Didn’t you ever go on a school trip and get told that you were an ambassador for the school, Bond? Straighten your tie (assuming you’re wearing one, which is probably a bit of a leap) and have a bloody shave, you look like one of those ghastly yobs off the programme about the nomadic Irish prostitutes.

Previous: Taylor Swift isn’t Tom Hooper’s Eponine! Someone good is!
Next: Avengers teaser from Superbowl is shorter than the Hulk’s temper