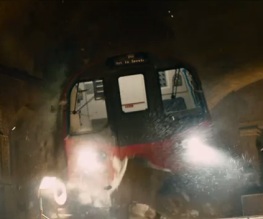 It’s apparently 157 days until Skyfall is launched in the UK – we’re sure we don’t need to tell you the significance of that number – and to celebrate, Eon has presented the keening hordes of Bond fans with their first glimpse at 007’s twenty-third adventure.

Thank Christ, someone’s finally noticed that Bond is straight up mental – sensible chaps don’t stand on roofs. Probably avoid saying things like ‘Gun’ and ‘Murder’, Beardy Psychologist, they might be triggers (get it?) – why don’t you just ask him whether he’s got any hobbies? Alright, suit yourself – he’s going walkabout now. M’s fine behind her magic wall, although Ralph Fiennes does seem to be checking to see if she’s dead. (She’s definitely going to die.) Next thing you know Bond’ll be charging off to the Far East and canoodling with Moneypenny Naomie Harris. And shooting people. And being shot at. And falling off things. And OH MY FUCK A TUBE I AM TWELVE YEARS OLD AND WHAT IS THIS. And unless we’re very much mistaken that looks like the characteristically shaggy silhouette of Javier Bardem. Cool guys don’t look at explosions, eh Jav? And then and then AND THEN “Some people are trying to kill us.”

What, you wanted a serious analysis? Come back in three days when we can breathe normally again.