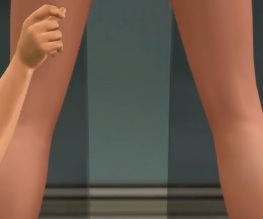 Take a look, ideally without fainting, sobbing or generally losing your shit:

…I mean, what? WHAT? That slo-mo tampon, complete with Paint.NET blood scribbles, might be the best/worst/most upsetting thing we’ve seen all year (and we’ve seen Magic Mike/Chernobyl Diaries/The Casserole Club). “It will dominate your time… much like Christian dominates Ana’s”. JESUS FUCK, philiafelice, someone needs to take your Sims load disc away, slide it between the pages of your woefully underused dictionary for reinforcement purposes, and then belabour you until you’re as red and swollen as, presumably, Anastasia’s weeping fandango after Christian’s hit it with an ocelot or whatever. Unless the CPS is reading, in which case we don’t think anyone should do that.

No, seriously. Does anyone have an ocelot?