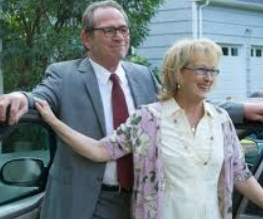 In a move presumably taken to try and shake off those pesky Oscars thrown at her at every turn, the glorious Ms Streep is going back to some light comedy in middle-age sexy comedy Hope Springs. Sure, it looks like she’s playing exactly the character she did in It’s Complicated but with slightly less nice hair, but by all account she spends most of this film trying to have sex with Tommy Lee Jones, so we’re probably on-board.

Featuring Tommy Lee Jones doing his gruff, miserably acting (otherwise known as his Tommy Lee Jones acting) Hope Springs centres on a relatively happily married middle-aged couple who want to put a bit of spark back into their relationship. It looks like it might be worth a watch just to see Steve Carell being very calm:

So sure, it’s the kind of performance Streep can knock out before she’s had her shreddies, but that doesn’t mean it won’t be good fun. It’s always refreshing to see rom-coms that aren’t centred around couples in their shiny twenties, and to be honest, it’s Meryl Streep. Has she ever done anything not totally damn charming? Hope Springs will be out later in the summer. We’ll all be too psyched about super heroes to bother.