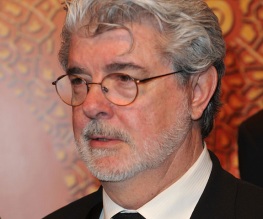 Star Wars creator George Lucas has claimed that his latest film has taken twenty years to make because major film studios rejected it on account of its all-black lead cast.

Red Tails (which Lucas began work on in 1988 with a scheduled release date of 1992) tells the true story of the Tuskegee Airmen, a group of African-American pilots who fought in the Second World War but were segregated from white airmen when not flying. Lucas co-wrote and produced the film, which was directed by Anthony Hemingway. The film stars high-profile actors including Cuba Gooding Jr and Terence Howard (and R&B star Ne-Yo, for some reason), but has no major white roles. Speaking on the Daily Show, Lucas said he carted the concept round all the major studios without anyone showing an interest. “I showed it to all of them and they said, ‘No. We don’t know how to market a movie like this’… They don’t believe there’s any foreign market for it, and that’s 60% of their profit.”

Black American cinema is an odd beast at the best of times – the enormously successful Tyler Perry, for example, is one of the most profitable filmmakers in Hollywood but is virtually unknown outside America, so completely is his fanbase composed of black Americans. Quite apart from the fact that it’s nice to see him doing something other than Star Wars or Indiana Jones, we’re thrilled to see George Lucas exposing one of the last bastions of acceptable racism – the ongoing cultural hegemony of the so-called WASP faction of American society. It’s not enough to make us forgive him for Star Wars 3D, mind you, but it helps. AND yesterday was Martin Luther King day! Nice one, George.

Will you be seeing Red Tails? Drop us a comment below!

Previous: TGIM! Totally Serialised at the Institut Français
Next: Idris Elba set to return to Asgard for Thor 2