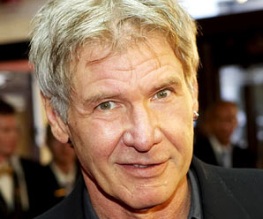 Proceed with caution. Harrison Ford may have signed up to reprise his role as Han Solo in the new batch of Star Wars films due to be made by Disney over the next few years. Though Ford, Disney and director J.J. Abrams have yet to confirm the news, neither have they denied it.

Following the flurry of speculation about the cast and content of the new films, reporter El Mayimbe from the Latino-Review went on Fox News on Friday claiming that the deal had finally been done. “Back in November Harrison Ford said he was open to the idea of returning as Han Solo, but it’s official,” this sage disclosed breathlessly. “Harrison Ford will reprise his role as Han Solo in the upcoming Star Wars movies. It’s huge. It hasn’t been reported anywhere yet. He’s officially coming back as Han Solo.”

While we at BFF Towers would urge you to take this news with a pinch of salt, we would also casually remind you of the power of Fox News in actually making the news happen. After all, it is frequently alleged that it was the ‘news’ network’s decision to call Florida for George W. Bush, before it had been reported anywhere yet that ultimately set in motion the chain of events that led to the eight year Republican presidency. Of course, comparing Harrison Ford reprising the role of Han Solo to George Jr reprising the role of Bush Commander-in-Chief from the senior is slightly absurd, but perhaps the more imaginative of you will see the connection. The point is that Fox makes news, and rarely simply reports it. So maybe this will happen.

Ford’s career recently has not been glittering, though checking out 2006’s Firewall gives an interesting glimpse of how angry and badass an aged Han may have to potential to be. Reports have suggested Solo’s film would be set in the time period between Revenge of the Sith and A New Hope, as noted here. This is somewhat confusing as clearly old Harrison isn’t getting any younger. Like the Millennium Falcon though, we’re sure Han would say “she may not look like much, but she’s got it where it counts, kid.”

Expect the first new installment in 2015, and for news and speculation to continue.

What are the odds on Carrie Fisher signing up? Would Han be alright without her? LET US KNOW