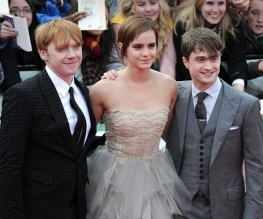 As the most successful film franchise of all time draws to a close, many were expecting a traditional Harry Potter deluge to spoil the photos and dampen the talent at last night’s premiere.

However, after several rainy days during which progressively more sodden fans camped out in Trafalgar Square for a chance to get near the red carpet and marvel at how Rupert Grint actually looks more like a Fraggle every year, the clouds finally parted. The unexpected sun and hordes of fans made for a cheery – if emotional – send-off for Daniel Radcliffe, Emma Watson (we’ve decided we don’t care about her acting as long as she keeps rocking the frocks) and the rest of the gang whose exploits finally end next week with the release of Harry Potter and the Deathly Hallows: Part 2.

If you weren’t one of the mad devoted thousands who turned up in person, we have some highlights from last night’s festivities for you. Have a look:

You can expect a Best For Film review tomorrow morning – or, if you’d rather wait and formulate your own opinions (please don’t, it makes our jobs worthless) then Deathly Hallows Part 2 is released across the multiverse on Friday 15th July. If it’s as good as the last one, we’re in for a hell of a treat.