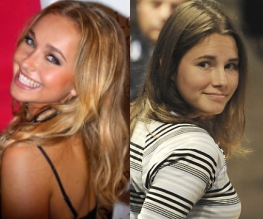 Hayden Panettiere is best known for playing Heroes‘ cute-yet-crucial cheerleader – Claire Bennet. Aliteration aside, it is a label she seems eager to shake off. Perhaps a little too eager if this latest career move is anything to go by; after all, what better way to separate onself from the image of a world saving cheerleader than by agreeing to star in a biopic of Amanda Knox, the US student convicted of killing 21 year-old Meredith Kercher? We think we speak for most people when we say this day has arrived horribly, horribly soon.

Though sensibly not deemed suitable material for an international cinema release, the astonishingly insensitive project (scripted by regular CSI New York and Law and Order scribe, Wendy Battles) is expected to go directly to US television – a prospect that only yields more potential danger. In America, and especially her native Seattle, Knox’s guilt has never been argued with the same certainty as here in the UK. With the student convicted of the horrific crime just 9 months ago and an appeal expected to be filed later this year, there is a worrying chance that the film could be used as a chance to paint Knox with an inappropriate – and, most importantly, unprovable – amount of sympathy.

Yet to focus solely on matters of guilt and innocence is to ignore another excellent reason why this poorly timed film should not be made. Asked for his view on the idea, Kercher’s father has stated: “I don’t like the idea of a film based on Meredith’s death. Seeing it graphically portrayed on the big screen is a horrible thought.” The news of this sensationalist casting is hardly likely to help.

Previous: Rachel Weisz in Psychosexual Drama. Let’s hope it’s mummyless.
Next: Film lovers of London UNITE! The Scoop, 7.30. Be there or you know what!