Hayley Atwell won’t be in Captain America: The Winter Soldier 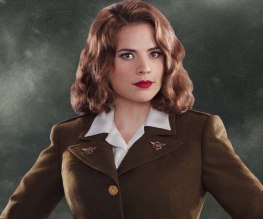 Get ready to cry into your bloodstained cigarette cards – Time Out has confirmed that Captain America’s love interest Peggy Carter (Hayley Atwell) won’t be returning to the Marvel fold for updated sequel Captain America: The Winter Soldier. We’re not that surprised – the film is set post-Avengers and Captain America: The First Avenger was set during WW2, so Peggy would be around 100 by now – but our fingers were crossed for some flashbacks of Hayley Atwell in her snazzy green uniform, barking instructions in a very welcome English accent (bless you for trying, though, Hugo) and generally heating up the Western front.

While the Marvel super-franchise may have lost its best female love interest (Liv and Gwyneth didn’t stand a chance, and not even Natalie Portman made the grade with her lacklustre performance in Thor), there’s still plenty to look forward to in Winter Soldier. Anthony Mackie’s Falcon, Sebastian Stan’s Bucky Barnes and, obviously, Sam Jackson will all be keeping things interesting when Chris Evans gets too goal-oriented and dull, and Scarlett Johansson will probably show up too so she can be mercilessly objectified. Perhaps this time her jumpsuit will actually have ‘Nobody in this industry values me as anything but a sex object’ embroidered on the arse? Whatever. In the meantime, here’s a YouTube video of Hayley Atwell set to some Linkin Park, because it’s 2003 at Best For Film Towers and always will be.

Captain America: The Winter Soldier is due out some time next year.

Previous: Django Unchained
Next: Carrie remake pushed back to Halloween