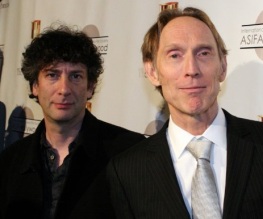 Stop-motion maestro Henry Selick has been named as the director of Disney’s forthcoming adaptation of The Graveyard Book.

Neil Gaiman’s wildly successful take on the premise of the Jungle Book sees a toddler escape his family’s murderer by hiding in a graveyard, where he is raised by a community of ghosts. If you haven’t read it, please do.

As this rather convenient photograph illustrates, Selick and Gaiman have crossed paths before – back in 2009, Selick directed the Oscar-nominated and Annie-winning adaptation of Gaiman’s multi award-winning novella Coraline. He also wrote the screenplay, so with Disney yet to nominate a Graveyard Book screenwriter speculation that Selick will shoulder both roles is rife.

Selick, who has earned critical acclaim as a director of live-action, stop-motion and CGI films including The Nightmare before Christmas (no, Tim Burton didn’t direct it), replaces Interview With the Vampire director Neil Jordan at the helm of the Graveyard Book project. Oscar-winner Jordan was linked to the film a few years ago but conspicuously failed to do anything like, oh, actually make it. Mind you, Selick isn’t starting work immediately – he’ll be approaching the graveyard after wrapping the secretive, untitled film on which he’s currently working. We’re so excited we can barely see, although that might be the buttons in our eyesockets…

Are you excited about The Graveyard Book? If you aren’t then you’re wrong.