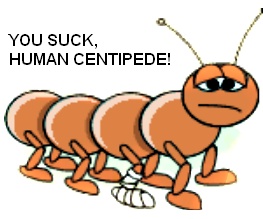 What’s this? The Human Centipede: Full Sequence might not go ahead? PRAISE BE TO ALL THAT IS GOOD AND HOLY!!!

The final installment of the controversial horror franchise was well underway, despite our protests, with Dieter Laser and Laurence Harvey planning on reprising their roles. Tom Six was happy. Sadists everywhere were happy. The rest of the human populace was locking itself in cupboards and breathing into paperbags.

But, in a strange turn of events, it seems the worm (or centipede) has finally turned; Laser has pulled out and Six, lovable fellow that he is, is preparing a lawsuit.

Tom Six made sure he announced this new development in the most subtle and professional way possible by using social networking site Twitter. And huge angsty capital letters:

“Because of the success of The Human Centipede, it seems that Mr Dieter Laser’s ego has grown to laughably big proportions. First signing the contract and rating the Human Centipede 3 script as fantastic, and then demanding his own unacceptable script changes, and now refusing to play the part only seven weeks prior to shooting. Six Entertainment Company will start legal action against Dieter Laser.”

Thank goodness for that! We call all rest easy in our b-

“Tom Six says not to worry; principal photography will be postponed and will take place later this year.”

Do you believe in God? Then how do you explain the constant presence of The Human Centipede?