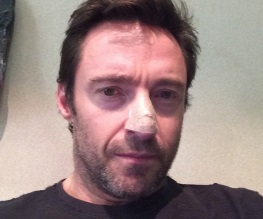 After honing his skills facing down Magneto, Dracula and Javert, Hugh Jackman recently took on his most deadly foe of all – cancer.

The Jacked Man, 45, took to Instagram yesterday to reveal that he is undergoing treatment for Basal-cell carcinoma (as far as we can tell, that’s a sort of little bastard cancer that generally turns up on your face), after heading to the doctor at his wife’s suggestion. He’s also rocking a mad cute little plaster on his nose, which virtually makes the whole thing worthwhile.

Deb said to get the mark on my nose checked. Boy, was she right! I had a basil cell carcinoma. Please… http://t.co/DESCvGR7GX

(In case you were wondering, we’re the ones that spelt his cancer right.)

We’re horrified to hear that TJM was feeling under the weather, but if anyone can kick cancer’s arse then it’s him. Nothing says ‘no need for chemo’ like adamantium, eh?

Previous: The Gravity spin-off short is the best thing ever
Next: Kevin Macdonald and Sainsbury’s launch Christmas flick