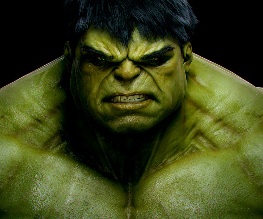 If you like your men green, quick to fly into a violent rage and difficult to understand, then you’re sure to be a huge lusty mess whenever Bruce ‘The Hulk’ Banner hits the screen. So why not treat yourself to an extra special deleted scene from Joss Whedon’s hit superhero film, Avengers Assemble?

Ok. Let’s remind ourselves of what’s going on prior to this sneaky clip; Mark Ruffalo got angry, Hulked out, tried to smash up Scarlett Johansson’s pouting face, FAILED MISERABLY and then plummeted out of the S.H.I.E.L.D. hellicarrier down to earth.

He then de-Hulks (new official terminology alert!) and finds himself naked, lying sprawled in a pile of debris with an elderly security guard looming over him.

“Are you a big guy that gets all little, or a little guy that sometimes blows up large?”

Well now, that’s pretty deep. Existential, some might say! After all, who IS Bruce Banner? Is he a man who becomes a green monster or is he just, like, a shell for a big old green Hulk to hide out in?

It turns out that THIS existential exchange is what pushes mild-mannered Brucie into rushing off to help his fellow Avengers, as well as helping him to do as Robert Downey Jr’s Iron Man told him he could right at the beginning of the film: CONTROL his Hulk personality and wear the green alter-ego, just like the other superheroes, as a suit of his own.

Awesome, huh? There are rumoured to be plenty more oh-so-revealing deleted scenes on the upcoming Avengers Assemble DVD – exciting shizzle!