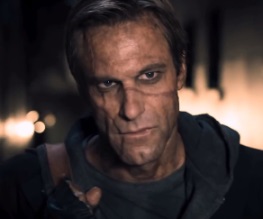 Hollywood’s been going a bit Scooby-doo recently when it comes to anything Supernatural. Vegetarian vampires, namby-pamby werewolves, hippy aliens and love-struck zombies have already taken their turn in the limelight, so it only seems fitting that the original sensitive and misunderstood monster finally makes it to centre stage.

Based on the graphic novel by Underworld co-writer Kevin Grevioux, I, Frankenstein picks up the story of Mary Shelley’s creation in the present day. It’s been over 200 years since the creation of Aaron Eckhart’s Adam, and suddenly he’s big news.

Take a gander at the new and improved, kick-ass version of Frankenstein’s monster here:

There is a woefully limited amount of information available on the Darkstorm Studio comic I, Frankenstein is based on, but we get the gist. Bill Nighy, as the wicked baddie, is hatching some diabolical plan which will see the annihilation of the human race. The plan apparently hinges on Adam and an army of monsters just like him, which is bad timing really coz he’s just taken up with the very human Terra (Yvonne Stahovski). Jai Courtney and Miranda Otto are taking on the form of gargoyles (YEAH-YAH!) who, in fighting the good fight, look bent on destroying Adam no matter what.

We’re not so sure about what is probably the BEST looking incarnation of Frankenstein to date but we ARE super stoked by the idea of gargoyles! It really is about time Hollywood brought those creatures out of retirement (and not in the comic relief kind of way as per Disney’s Hunchback of Notre Dame poppycock). Bearing in mind its origins, there is a certain reminiscence to be expected in I, Frankenstein. And yet, under the adaptation and direction of Stuart Beattie, the flick seems to take on a warmer, more colourful tone in its slick stylization. Find out whether that’s just our eyes playing tricks on us on January 24th, 2014.

Previous: Sunshine on Leith
Next: Reese Witherspoon to live Happily Ever After