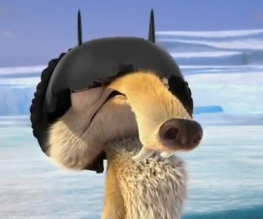 Ice Age: Continental Drift comes out tomorrow – that’s Friday the 13th. An odd choice, as is 20th Century Fox essentially advertising the Warner Bros. summer blockbuster that’s going to destroy absolutely everything else at the box office come the 20th July. Nonetheless, the Ice Age team have made a nice little parody of The Dark Knight Rises, with Scrat as Scratman (like Batman, but with more Scr).

It’s quite nice, but doesn’t make us any more excited about seeing the film. You know that little squirrel from the first Ice Age, the film with a coherent plot and proper characters? The one who couldn’t find his nut or something? Yeah, this whole film is about him. Again.

Was Ice Age ever funny? Oh yeah, it was. When we were ELEVEN.

Previous: The Casserole Club
Next: The Rise and Fall of a White Collar Hooligan