Iron Man 3 to be sequel to five other films 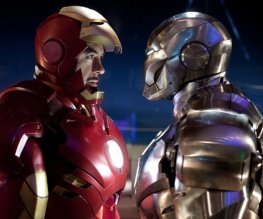 Iron Man director Jon Favreau has revealed that the third and final film starring Robert Downey Jr. as the armoured bullyboy will in fact be a follow-on from five other films.

As well as picking up the threads of Tony Stark’s story from Iron Man 2, the plot of the unwritten threequel will be consistent with those of The Avengers, Thor, Captain America and Hulk.

Captain America and Thor, which are currently shooting, are reportedly undergoing Marvel’s trademark on-set trauma, with the plot metamorphosing before the very eyes of the bamboozled actors, so it’s anyone’s guess what’ll actually be going on by the time we get to Iron Man 3 in far-off 2013. We’re keeping our fingers crossed for space ninjas. As usual.

What do you think will be messing up Tony Stark’s hair in Iron Man 3? Will The Mandarin finally make an appearance? Let us know your unavoidably baseless opinions below!