Is Megan Fox the new Katharine Hepburn? No. 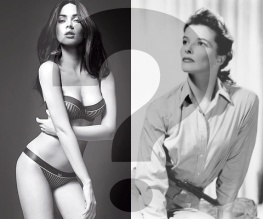 Josh Brolin, the noted expert on all things cinematographic, has claimed that ambulatory pair of tits Megan Fox is the new Katharine Hepburn.

The Jonah Hex actor seems to believe that his co-star’s talent of being hated by everyone but slavering fifteen-year-old boys is in some way reminiscent of the controversy caused by Hepburn’s acerbic intelligence and defiant refusal to mince around in a frock and three inches of makeup like all her contemporaries.

Talking to Playboy (yes, we know), Brolin suggested that “What Megan has done is confuse everybody thoroughly.” Sorry, Josh, but that’s utter bollocks, isn’t it? The only thing confusing about Megan Fox is how she continues to get roles which require her to do anything more than be attractive in a miniscule amount of clothing. Or rather, it would be confusing if that ever happened. Which it hasn’t.

The Goonies would be ashamed of you, Brolin.

Previous: Interview! We talk to Jackboots on Whitehall directors the McHenry Bros.
Next: Frozen