Jack Reacher beats the crap out of 2 new TV spots 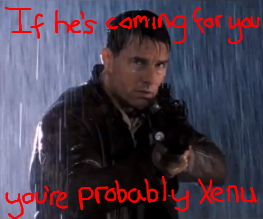 Jack Reacher, as played by an oddly smarmy Tom Cruise, is all set to hit (both figuratively and literally) UK cinemas 26th December. In the meantime we have been gifted two brand new TV spots by the all-powerful Xenu with which we will impregnate you with an alien baby. Or was that an episode of The X Files? Either way, they’re punchy, they’re one-liney, they feature a terrifying Werner Herzog. Enjoy.

The first is titled “GUNS”

The second is titled “RUTHLESS OMG” (we added the OMG)

Jack Reacher is an adaptation of Lee Child‘s book One Shot, and features a charming angry midget beating people up until he (improbably) catches a psychotic gunman. All jokes aside, we’re rather excited for Jack Reacher. No, seriously!

Are you a Jack Reacher book fan? Which of the two TV spots do you prefer?

Previous: Jesse Eisenberg makes us feel stupid again in Now You See Me
Next: The Twilight Saga: Breaking Dawn – Part 2