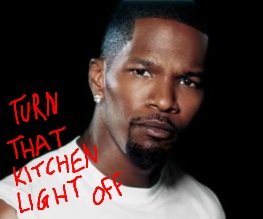 Man of the moment Jamie Foxx is in talks to join Will Smith and Jay-Z’s forthcoming remake of Annie, which recently topped an overdue elephant baby to become the slowest-gestating project of all bloody time.

Foxx, who won an Oscar for his portrayal of Ray Charles and recently starred in Spike Lee-baiting Tarantino flick Django Unchained, is considering the iconic role of Daddy Warbucks, the miserly millionaire whose heart is melted by a scruffy little ginger girl (read: Quvenzhané Wallis).

We don’t know a lot more about Foxx’s casting, but what we do know chills us to our bones. Although ‘Daddy Warbucks’ is clearly one of the best names ever and something that virtually everyone would like to be called in bed, it is evidently considered too old-fashioned a name for Will Gluck‘s edgy, modern take on the saccharine orphanage musical. With that in mind, Daddy Warbucks has been renamed ‘Benjamin Stacks’, which retains the veiled moolah reference of ‘Warbucks’ while sounding like a plausible name for a music mogul or a dotcom billionaire or whatever he turns out to be.

EDIT: At least, we think that’s the reason for the name change – according to Vulture.com commenter NYCBOY73, “Benjamin Stacks just sounds blacker than Daddy Warbucks. It’s only complicated if you’re non black ;)”. So there’s that. Does he just mean that ‘Stacks’ rhymes with ‘black’? Because ‘Warbucks’ rhymes with ‘more trucks’, but we don’t remember anyone insisting that an Eddie Stobart driver star in the 1982 movie version, or that Albert Finney get an HGV license before taking the part. Oh, maybe NYCBOY73 is just an idiot? Cool.

Are you up for seeing Daddy Foxx in Annie? Let us know below!

Previous: Colin Firth about to join the Woody band wagon?
Next: Sam Worthington signs on for sensitive subject of slavery