Jason Bateman and Melissa McCarthy team up for ID Theft 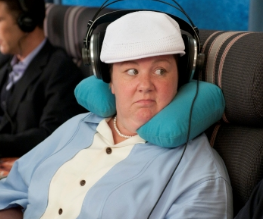 Though Angie Jolie was the first lady in recent years to take a part written for a bloke (that’s Salt, trivia looters), it looks like Melissa McCarthy will bring the FUNNIES to the gender-switching table. She’s apparently been asked to star opposite Jason Bateman in the upcoming ID Theft, after Bateman pushed for a re-write to include her. Probably fancies her or something.

The role, originally written for a man, will see McCarthy steal Bateman’s identity (how did they come up with that title eh) with extremely loud hilarity ensuing. It’s been a good summer for both actors, with McCarthy stealing every scene in Bridesmaids and Bateman just about getting away with Horrible Bosses – and it’s good to know that Bateman isn’t afraid to share the screen with someone who might steal it from under him. Still, seeing as he’s producing ID Theft as well as starring in it, so he can at least make sure he comes out on top in the cutting room. That, and he can stop Judd Apatow from popping up and shouting “WHY DOESN’T EVERYONE DO A BIG POO? THAT WILL BE REALLY FUNNY, WON’T IT?”