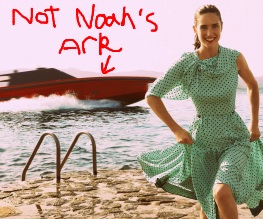 Reports are surfacing that Jennifer Connelly is finally coming aboard to play Naamah, the wife of Noah, in Darren Aronofsky’s adaptation of the biblical epic. And about time too- the Labyrinth star’s name has been being thrown around in conjunction with this project since April, and according to /Film she has been involved in read-throughs from the very start. She may even have been involved before Russell Crowe was cast as Noah – meaning that the rumours of Julianne Moore taking the role were unfounded.

Connelly has previous with both her new director and her nautical leading man – her breakthrough performance as a fully-fledged adult actress was in Aronofsky’s seminal Requiem for a Dream, and she won her Oscar (Best Supporting Actress) for playing the wife of Crowe’s character John Nash in A Beautiful Mind. Still, “my husband is a schizophrenic mathematician who thinks he’s working for the Pentagon” doesn’t really touch “my husband is a nine-hundred-year-old boatbuilder who thinks God is trying to drown everyone on earth except him” on the oh-fuck-Russell’s-snapped scale…

Filming is to begin next month in preparation for a March 2014 release, with Ray Winstone playing an Unspecified Villain and Logan Lerman, Douglas Booth and Emma Watson playing Noah’s sons and daughter-in-law respectively.

Mrs. Noah isn’t a big character in the original – she isn’t even named in the Bible, because God’s a massive sexist – but we’d like to think, despite Aronofsky promising a “close adaption”, that he and his co-screenwriters have something vaguely feminist up their collective sleeve. Can you say ‘Captain Naamah’?

Previous: Hans Zimmer to score Man of Steel
Next: The Five-Year Engagement