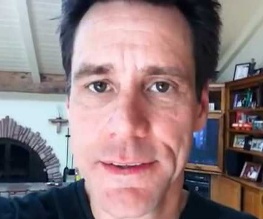 It’s been a rather active weekend in the celebrity world. Beyonce announced her pregnancy at the VMA’s, officially creating Jay-Z’s 100th problem, Anne Hathaway has been considering sinking her talons into yet another famous piece of airport literature with Les Miserables and oh yeah- Jim Carrey might be completely insane.

In his debut video blog for his video blog website www.Jimcarreytrulife.com, Jim Carrey announced to the world, but specifically the actress Emma Stone, that he thinks she is “All the way beautiful. Not just pretty, but smart and kind-hearted.”

The 22 year old actress, who has been earmarked as one of Hollywood’s Next Big Things, initially came to prominence in films like Easy A but has recently garnered international recognition with roles in The Help and The Amazing Spiderman. While no-one is lynching the 49-year old Carrey for his crush, the video treads a confusing line between the comedic deadpan and the downright creepy.

“If I were a lot younger I would marry you. We would have chubby little freckled-faced kids. We would laugh all day long, and tell ghost stories by the fire… and the sex…” Carrey then pauses momentarily and rolls his eyes in hypothetical bliss “…and every day for the rest of your life you would thank god that I was the appropriate age for you.”

The internet is torn. Is this a darkly comedic prank, or is Carrey losing it completely?

In response Carrey tweeted the (frankly legendary) following “People often ask me if I’m being funny or serious. The answer is YES.”