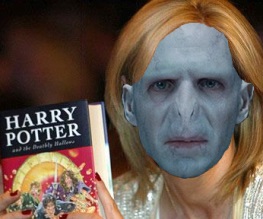 Slavering moneyhound Robert Galbraith, otherwise known as [this must be a] JK Rowling, has finally sawn through the last quivering spiritual tendon keeping her black, tainted, Horcrux-cloven soul tethered to her relatively inoffensive little body.

Speaking from a throne upholstered entirely in the skin of royals and political leaders (David Cameron is rumoured to have ‘donated’ a swatch after Rowling offered him the four hundred million pounds she’d found down the side of the sofa that morning), the Nyarlathotep of preteen wizard twaddle recently announced that she was writing a screenplay for another film – the first, in fact, of a new franchise – set in the meticulously-plotted-but-basically-crap world of Harry Potter.

Nominally based on the 42-page booklet Fantastic Beasts and Where to Find Them, Rowling’s new collaboration with Warner Bros (now based at Minas Morgul after their chanting upset other Holborn businesses) will see her write her first screenplay. Fun fact: this will also be the first thing she’s written for several years that didn’t involve using the blood of orphans as ink, because you can’t install the blood of orphans on Celtx. She’ll probably just smear it on her face instead.

Set seventy years before the Harry Potter series, Newt Scamander and the Statistical Inevitability will begin the tedious story of ‘magizoologist’ (ugh) Newt and his adventures in New York City, hidden from the eyes of the Muggle world. It’s just going to be like Men in Black, isn’t it? Men in Black, but with Hippogriffs in the sewers instead of rubbish aliens. And there’s going to be a streetwise black wizard, because obviously, and an Eyetalian-American wizard with a vague mob connection that’ll go over the kids’ heads, and he’ll say his dad cast Engorgio on Al Capone and that’s why he’s got so fat recently. God, this is an awful bloody idea. And all the gargoyles will be sentient, like in Gargoyles but infinitely less good, and Dumbledore will be in it as a precocious six-year-old and oh god, oh GOD, Joseph Gordon-Levitt is going to play Newt, isn’t he? He bloody is, of course he is. Or will he be too old by then? If it’s not some fashionable American twonk it’ll be one of those Italia Conti idiots who sounded too posh to be in Skins, mincing off the boat and making wry jokes about the Titanic while they continue touting the only exportable commodity we have left to offer the world except craft beer and weed grown in Milton Keynes – ghastly, lowest-common-denominator pseudoculture that blackens and deforms everything it touches. Which brings us nicely back to JK Rowling’s soul.

If you’re excited about this news, please get off our site. Why don’t you go to Pottermore? Everyone loves you on Pottermore, and you’ll never have to read a proper book as long as you stay there. Not ever.

Previous: Loki gets vaguely foreign poster for Thor: The Dark World
Next: Is Breaking Bad’s Walter White one of TV’s greatest bad guys?