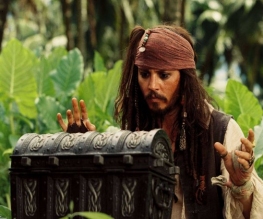 Ever since Elizabeth Taylor set a precedent with her demands of $1 million for appearing in giant money-hole Cleopatra, actors and actresses have priced themselves higher and higher in the name of buying really expensive things. Even accounting for inflation, however, that measly sum pales in comparison to the amount Johnny Depp will reportedly bank for Pirates of the Caribbean 5.

According to The Sun (bear with is, they seem to have an actual source), the actor is looking to earn approximately £60 million for his fifth outing as Captain Jack Sparrow, just shy of half of the first film’s entire budget. Let’s just consider this for a minute: £60 million. For money like that, he could at least try to make a half-decent movie this time.

Having recently split from Vanessa Paradis (a singer, apparently), the wage packet will at least help him support his two children and ex girlfriend. As well as about four small countries of his choosing. The source claims that “this huge deal for Pirates means he will be able to pick his other roles very carefully on the strength of their script rather than their salary.” That is, should he ever choose to work again.

Keep in mind that we are only talking about one film here. Depp is apparently eager to avoid over-exposure, with his opportunistic spokesperson insinuating that he doesn’t want to end up like John Travolta or Nicolas Cage. You know, poor.