Jonah Hill and James Franco to star in A True Story 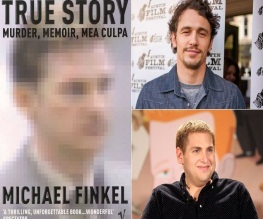 Oscar nominee and Man of the Moment Jonah Hill has joined last year’s golden boy James Franco in the cast list for A True Story, based on the memoirs of Michael Finkel.

The film, which is indeed based on a true story, is about New York Times journalist Michael Finkel. Finkel receives news about a man, Christian Longo, who was captured after murdering his whole family; the catch is that he changed his name to ‘Michael Finkel of the New York Times’. The following day, the real Finkel gets fired for falsifying parts of an investigative article, but he remains the only person Longo is willing to speak to about his crime. So ensues a shady game of cat-and-mouse that’ll probably have you scratching your head about just what the hell is going on at several points, but in a good way.

The film is described as ‘part mystery, part memoir, part mea culpa’ that enquires into the ‘slippery nature of truth.’ Produced by Brad Pitt, who’s giving English theatre director Rupert Goold his film debut, this twisty-turny thriller is one to keep an eye on in 2012.

Previous: Safe House
Next: Lucy Liu to play Watson, as in Sherlock’s Watson