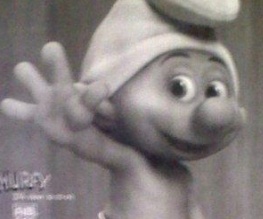 Wow, the smurf news just keeps piling up this week. First we hear that Neil Patrick Harris is set to play some kind of human in the upcoming Smurf film, and today it’s been revealed that Smurfette will be voiced by music star Katy Perry. Well, at least as the only female in the midst there’ll be no fear of her kissing any girls and liking it.

She has also been joined by Alan Cummings, who will be playing grumpy smurf (with probably a serious depth of character) and it’s also been confirmed that an original smurf voicer Jonathan Winters will return to play Papa Smurf at the age of 84. Impressive stuff.

The problem is, you can throw as much smurf news as you like at us, but its still very difficult to get excited about a film that has characters with names like like Grumpy Smurf in it. But we’re willing to wait and see. You never know, we might one day be singing “We watched the Smurfs and we liked it”.