Kick Ass 2 to be darker than the original 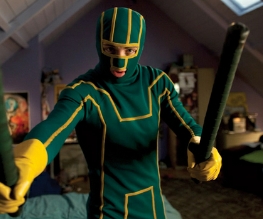 With everyone leaping all over Mark Millar as to what literally everything in Kick Ass 2 is going to be like, it was only a matter of time before the poor bloke had to say something about the film. Well, he’s done it now. And by all accounts, we should prepare ourselves for an even darker tale than we experienced in the original.

Speaking at Kapow! Comic Con, Millar assured slavering cape-wearers that the Kick Ass 2 movie will not shy away from the shocking scenes in the book, and that if anything, the team will endeavour to keep in the most monstrous moments:

“Every horrible scene in the book will be in the film.” he said, “The c**t line in the first one, everybody said ‘there’s no way you’re getting that in the movie’, but it happened and it’s the same thing with this. Everybody is saying ‘you can’t have a gang rape scene with supervillains’ and ‘you can’t have the dog’s head cut off’, but every single one of those scenes will go in it.”

Whew! Gang rape! He’s also looking forward to the transformation of Red Mist into The Motherfucker – a change that will seriously test the real proper acting skillz of Christopher Mintz-Plasse.

“To see the guy you know as the charming McLovin doing awful things, it’s going to be doubly upsetting, and that was always the plan. He’s a very, very underrated actor. I think sometimes if you do comedy, people don’t accept that you are a serious actor, but he’s one of those guys who can turn his mind to anything.”

MAKE IT! LET’S START MAKING IT RIGHT NOW DAMMIT! And give Matthew Vaughn all the money so he’ll come back!

Previous: Portman and Ramsay team up for Jane Got A Gun
Next: Even more bloody Dark Knight Rises posters released