Kristen Stewart is a cheating slutbag 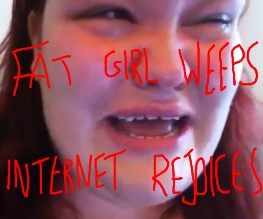 Erm, so this is real. Like really, really real. We took the piss yesterday, believing the whole thing to be no less than 50 shades of cray – last time the Daily Mail caused this much of a stir, Samantha Brick was blinding us all with her dazzling snaggletooth. Alas, where one crooked smile closes, another one opens and is promptly stuffed with illicit willy. So yes, Kristen Stewart has actually released a statement whining about how sorry she is for cheating on People‘s No. 1 Most Beautiful Person of 2010, and Snow White and the Huntsman director Rupert Sanders has added cheese to that whine, in the form of an apology to his “beautiful wife and heavenly children”. Mate, if you’d have been quite so Biblical before all this, you might not be wiping the proverbial blood off your sword, would you? Evidence here: 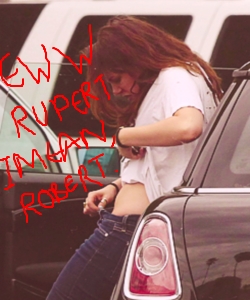 The official statements given by both Stewart and Sanders (can you just imagine the Stewart-Sanders children at school?) can go fuck themselves; the jewel in the crown of Kristen Stewart’s perfidious poontang is Tumblr. The combustion of international Twihards is so extreme that the Pentagon should probably be prying the ol’ WMDs out of Obama’s basement and prepare for a bit of covert euthanasia – once they pull themselves out from the belly of nationwide grieving, obviously.

1) A Robsten by any other name would smell of betrayal? 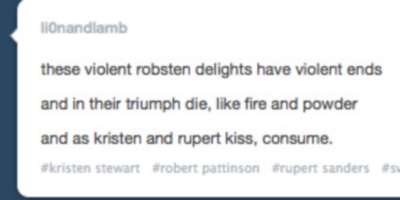 3) “FOR FUCK SAKE PEOPLE IT’S PHOTOSHOPPED. JESUS.” Direct quote from NuttyMadam’s Twitter. We still don’t know why everyone keeps trying to bring Jesus into this; he’s got lepers to not heal and natural disasters to help along. (Though we are aware that Kristen Stewart is an acting scourge not unlike leprosy). 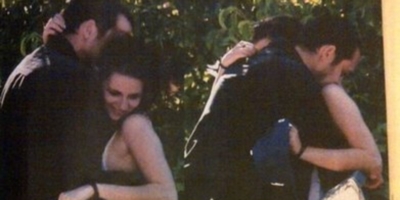 BFF might have to get a Tumblr now; we don’t want to miss all the fun. Will you be joining us?

Previous: Orange (Wednesday)s and Lemons #80
Next: Alex Pettyfer to star with cheating slutbag