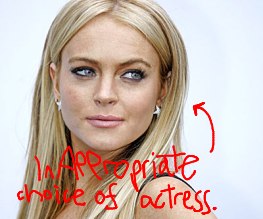 Jewellery thief, jailbird and occasional actress Lindsay Lohan is set to return to cinemas after a two-year absence – with a Borat rip-off that costars Rob Schneider. Lucky girl. InAPPropriate Comedy, a sketch comedy film which will give Lindsay Lohan the chance to confront the “salivating paparazzi who haunt her” and, coincidentally, are the only people keeping her in the public eye, has just been picked up for a US theatrical run by Freestyle Releasing.

Apart from her brief, naked, utterly ridiculous role in the admittedly excellent Machete, Lindsay Lohan’s major performing engagements for the last few years have largely involved getting her tits out in Playboy, getting her vulva out when exiting cars and, probably, desperately singing a medley of Disney hits to distract her cellmate from the fact that a Hollywood childhood doesn’t exactly prepare one for avoiding prison sex. If underdressed former child stars are your thing, then you’re much better eschewing Lindsay Lohan altogether and sending your lipsticked love letters to the glorious Mara Wilson, who made our lives last week when she went to a Hallowe’en party as Sexy Ayn Rand (click to enlarge): 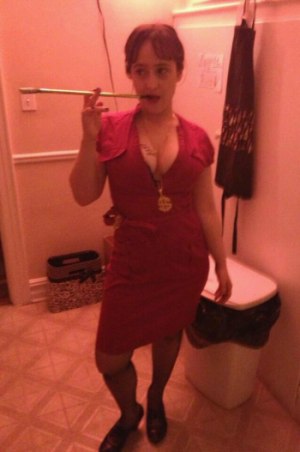 We love you, Mara. ANYWAY, Lindsay Lohan! She’s still an idiot. We’re trying not to talk about the excruciatingly badly titled Liz & Dick, the made-for-TV Elizabeth Taylor biopic in which Lindsay Lohan will be starring next month, so let’s (reluctantly) return to InAPPropriate Comedy. 2409752 – that’s her inmate number, natch – will be accompanied by Adrien Brody (what are you doing, Adrien? You have an Oscar!) as “‘Flirty Harry,’ a tough, no-nonsense cop with a flair for fashion”. Rob Schneider, who has literally never been any good even when he isn’t waddling around a set with bloody Lindsay Lohan, is saddling up for a dual role as “a sleazy psychologist and a curmudgeonly porn critic”, and comedian Ari Shaffir is playing “The Amazing Racist”. We sort of want that on our CVs, obviously, but otherwise DEAR GOD how awful does this film sound?

Oh, you think that’s as bad as it gets? HAHAno. The director, Vince Offer, is apparently best known as ‘the ShamWow Guy’ (we think he’s a bit like the Cillit BANG man), and according to Wikipedia he was once arrested for beating up a prostitute who “bit [his] tongue and wouldn’t let go”. Oh, and Lindsay Lohan’s voting for Mitt Romney. Everything we hate about the world, conveniently lumped into one big reel of cinematic awful! Fortunately, there’s no word yet as to whether InAPPropriate Comedy will be released over here – let’s hope no news is good news…

Is anything on earth worse than Lindsay Lohan? Probably not.