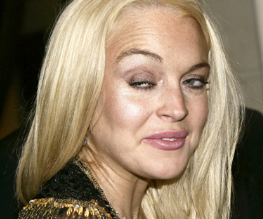 After wrapping on made for TV car-crash movie Liz and Dick a few days ago, Lindsay Lohan is attempting to revive her career further by joining talks with Bob Weinstein to possibly join the cast of Scary Movie 5. Bob, Bob, Bob, what are you thinking? Do you want to embark on a feature shoot with Lindsay Lohan? That shoot would go on longer than filming for The Hobbit with all the days off from “exhaustion” that Lohan would need.

Sadly for Lindsay (but good for us) it seems that she will only have a cameo part in the film (and no doubt die very quickly). She will be joining the ranks of “great” Scary Movie cameos, following in the footsteps of Pamela Anderson and Carmen Electra. The film also showcases the “talents” of High School Musical actress Ashley Tisdale.

Jail bird Lohan has not had a very easy time of it lately, with more stints in hospital for “exhaustion” (heheheh…sorry, we just can’t take that one seriously) and also after she crashed her car into a 4×4 whilst filming Liz and Dick. Her criminal record is starting to look more impressive than her IMDb.

Do we really need yet another Scary Movie? I suppose failing Hollywood actresses need something to do in order to get money to buy groceries (in Lindsay’s case…groceries of the white powdered variety). This film looks almost completely like a write-off, except for one tiny glimmer of hope. David Zucker, writer of Airplane! and The Naked Gun series has been enlisted to write the screenplay. Fingers crosses that something worthwhile will emerge. Anyway, it is perfectly possible that Linday will be arrested again before filming starts. http://credit-n.ru/blog-single-tg.html http://credit-n.ru/offers-zaim/creditter-srochnye-zaymi-online.html