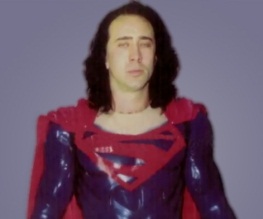 Everyone enjoys a good giggle about Nicolas Cage, his Nouveau Shamanism, and his frankly inexplicable output. His baffling decisions have become part of the background noise of life, as comforting as oxygen, or the vague threat of the Mayan apocalypse. But even for him, even for us, this news is properly, properly mental. Lionsgate are planning a film based on the fact that Cage had a comic book stolen back in 2000. Really. Like, really.

But wait, it’s not as ridiculous as it sounds, because this isn’t just any comic book, it’s a rare copy of the first ever issue of Action Comics (released in 1938), which first featured a certain Superman. The film will be mostly fictional, and involve a squad of geeks planning the heist of the precious Cage-owned comic.

OK, we retract our statement that it’s not as ridiculous as it sounds, it’s in fact fucking absurd. What’s more, Cage probably won’t be starring in the film, and that Jason Statham is being considered to play him. Incredible, just incredible.